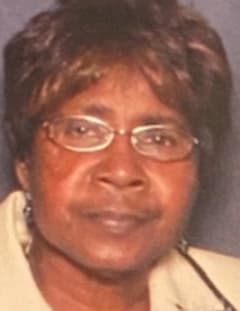 Graveside service will be February 28th, 2021, at 2:00 PM at Fellowship Baptist Church Cemetery in Greenville Ga.

Visitation will be from 3 to 6 PM at Sewell Mortuary on Saturday the 27th.

Mrs. Dora Louise Brown, a Virtuous Woman, well known as (Eve) was
born May 2, 1938 in Meriwether County to the late John and Lucille
Reeves. She transitioned peacefully to her everlasting home on
Thursday, February 25, 2021.

She attended Meriwether County School system. She worked at
Olsonite Corporation (Royal Molding) for many years and retired in
2004. Her passion was making white oak baskets, a tradition that was
handed down from her father. She traveled all over the state
showcasing these baskets, until her health failed.

She joined the Fellowship Missionary Baptist Church in Greenville,
Georgia at an early age and served faithfully until her health failed.
Louise (Eve) was God-fearing, faithful, servant and served on the
Usher Board. She was well known in the community for getting
everyone “church dues”, whether you were going to church or not.

On January 9, 1961 she joined in Holy Matrimony to Mr. John Henry
Brown. They love each dearly for 60 years. John was devoted to
Louise to the very end. To this union, four children were born.

God will wipe out every tear from their eyes and death will be no more. Rev.21:4
- Carol Matthews

My condolences to you and the family. Be encouraged family. The ones we love are never gone; they live within our hearts. From India and I.
- Monique Hasley

From my family to yours, our deepest condolences. There's no sorrow that Heaven cannot cure. Continue to lean unto God's unchanging hands. Be bless. Andrea Rowe.
- Andrea Rowe

Condolences to The Brown Family from Eliza Gates, Columbia, SC. I regret that I am unable to be with my family in the time of your lost. I received the news this morning. Lean to God, He will give you all the strength you need. ❤️
- Eliza Gates

My heart goes out to you all! Please know you are all in my thoughts and prayers!
- Nikki

Stef my heart goes out to the entire family. Please accept our prayers and condolences. Love you sis
- Erika Grier