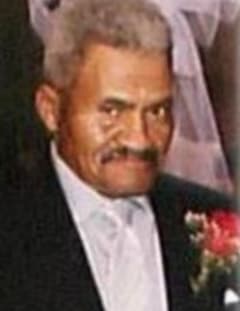 Funeral Service is Saturday, January 11th, at 11:00 AM at Mt Sinai Baptist Church in Gay Georgia.

Visitation is Friday from 2 to 6 PM at the funeral home.

Mr. George Henry Wimbush was born in Meriwether County on February 22,
1936 to the late Silas Wimbush Sr. and Mrs. Ceola Nixon Wimbush.
At an early age he confessed his faith in Jesus Christ as Lord and Savior and
joined the Mount Sinai Missionary Baptist Church. He remained a faithful
attending member until his health failed him in the mid 1980s. He enjoyed
reading God’s word, watching NASCAR, and listening to gospel; preferably,
Mahalia Jackson.
It was on a beautiful, sunny December day the love of his life caught his eye,
Ms. Mozelle Godfrey. The two joined together in holy matrimony on November
25, 1956. They shared sixty-three years together.
George worked for Gate City Table Company, Waste King, Bonnell Aluminum,
Delta Airlines, and Daniel Radiator before becoming self-employed. Starting in
1970, he became an agricultural entrepreneur, growing soybeans, corn,
peppers, hogs, and so much more. He continued to master agricultural
entrepreneurship until his accident in 1980.
A few years later, being the fighter he was, George began another successful
entrepreneur journey in lawn mower repair. He started with a shed full of tools
and ended with a lifetime of friends from far and near.
He was preceded in death by his parents; one son, George Vincent Wimbush;
three brothers, Essex Wimbush, Silas Wimbush Jr. and Eddie B. Wimbush; one
sister, Carrie Wimbush; and daughter-in-law, Vivian Wimbush.

A near and dear friend, Mr. Floyd (Cowboy), became more like family and was
there until the end. Whether it was a laugh George needed or simply a helping
hand, there was no doubt that Cowboy would be there.