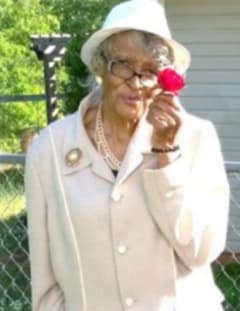 With humble respect, Sewell Mortuary in Grantville announces the transition of Jewell Caldwell on Sunday, May 30th, 2021.

The funeral service will be June 5th, at 11 AM at Greater Siloam Missionary Baptist Church 777 Chipley Hwy Greenville GA 30222

Jewell Parks Caldwell was born September 14, 1935 in Meriwether
County to the late Jessie Parks Sr. and Ruby Parks Harris. Jewell was
an active member of Greater Siloam Missionary Baptist Church where
she served faithfully as a mother of the Mother Board. She enjoyed
spending time working in her yard taking care of her flowers and
always taking care of her neighbors.

Jewell was married to the late Gilbert Caldwell Sr. for 38 years.

Besides her parents, Jewell was preceded in death by daughter
Juanita Caldwell; her brothers Jessie Parks Jr. and Neal Parks.

So sorry for your loss, may the love of God comfort you at this time.
- Bertha Amey

So sorry for your lost.Praying for the family.
- Effie Cotton

To Vernita and the Caldwell family. I am sending prayers and my condolences to you all. I didn't know Mrs. Jewel but I know Vernita and they say the apple don't fall far from the tree. Judging from that she was a sweet and beautiful person. Praying that God will continue to strengthen you all during this time of sorrow.
- Surnonia Daniel

Vernita, Connie, Pat and family, it is with deepest sympathy and profound sorrow that we express our most sincere condolences to the family of Mother Jewell Caldwell. May the Holy Spirit comfort you with peace and covers your heart and mind. In our thoughts and prayers, we will keep you today and, in the days, to come. Grace and Peace 1 Thessalonians 4:13-18
- YoLanda and Greg Colton