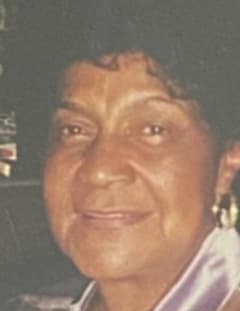 Visitation is Sunday the 11th, from 1 to 4 PM at Sewell Mortuary.

Mrs. Lessie Rebecca Catlett Drummond was born October 29, 1926 in
Gloucester, Virginia to John and Edna Catlett. She was the youngest of
ten children. That would be the last time she would be last in anything
she pursued.

While in Virginia, Lessie as very involved with Sandra and Marva’s
education at T. C. Walker. She was the president of the P.T.A. and the
head dietician. She organized fundraisers that involved basketball
tournaments between the teachers and the parents.

As the family grew, Ma convinced my father Bobby, we needed to move
to New York. First my oldest sister Sandra and we soon followed. We
lived with Mom’s oldest brother Ben and Aunt Ruby. We discovered
another of our mother’s talents. She had a beautiful voice that was
discovered and the talent agency offered a contract. She would have to
travel with the band. She declined. She wouldn’t leave her three
daughters and husband. She did domestic work for a while, bringing
home yamakas and Jewish food.

We moved into our own house but returned to Port Chester every day
because we still had jobs there. Next, she worked at a large mental
institution where they loved her so much. She would bring patients
home to spend the weekend. Our Lessie always had room in her heart
for one more. She also regularly invited bums to our back porch and
she provided dinner.

As the family grew and both parents had two jobs. We mostly ate
together on Saturday mornings and Sunday night. Mrs. Drummond was
an excellent cook and my father was too. Some of the happiest times in
our house was when they cooked together in the kitchen.

Mom continued to perform now and then but she always had bigger
ideas. She rented out the back of Eddies Palm Garden and opened a
restaurant. She had two teen aged waitresses, Joy and Janie. She ran
midnite brunches for co-workers. She didn’t have a menu. Whatever
she cooked, that’s what she sold. She allowed a single mother with a
lot of kids to pay her once a month for food for her kids.

Next she drove a private school bus and became a Kosher butcher.
Wherever she worked and left, she made new friends.
One other talent emerged. She was a good dancer, if she had the right
music. She was brave and she was fearless. Ma saw Mr. McClain being
stoned while Shellie was with her. She stepped in and her little Shellie
escorted Mr. McClain home.

There’s not enough paper to tell her whole story. She was never dull.
Just being her authentic self was enough. She comforted many who
knew her.

She’s a hard act to follow. Just be comforted by the fact you knew her
all. Lessie Rebecca Drummond walk on to glory. “We Got You Putz.

So sorry for you and your families loss. Mrs.Lessie was a wonderful lady my mom loved her and so did my boys and me. Loved living by her in Grantville. Love yall Lisa,Joshua and Joseph 470 246 6134
- Lisa