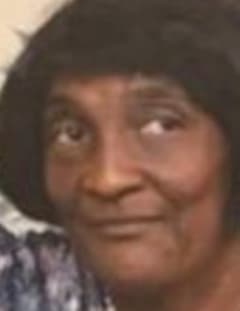 Sister Louise Gamble Dickerson was born December 24, 1929 to the late
Bertha Copeland Gamble and William Gamble in Manchester, Georgia. She
departed this life on February 10th, 2021.

Sister Louise was lovingly called “Granny” by her grandchildren and “Aunt E”
by her nieces and nephews. She will always be remembered for sharing
“yackies,” her word for snacks, with all the children in the family and
neighborhood. She also shared her “yackies” with people at church, her
neighbors when she lived at Pigeon Creek Apartments, her friends at the
Manchester Senior Center, and later, the Warm Springs Nursing Home. Every
first of the month, everyone knew they would be bestowed with gifts of
pecan rolls, Spearmint chewing gum, “little hugs” juices, cookies, crackers or
“Kit Kat” candy bars, and for Christmas, a big peppermint stick.

Sister Louise was also known for cooking and some of her best and favorite
dishes were beanie weenies, carrot salad, country style ribs, dressing,
German chocolate cake, greens, and rutabagas. She also loved flowers and
could get almost anything to grow. She had a sharing heart, and she showed
her love by showering family and friends with little tokens of appreciation.

She was a faithful member of Arbor Chapel United Methodist Church in
Greenville, Georgia until her husband’s health failed and she returned to
Manchester, Georgia from Woodbury, Georgia to live with her sister, Martha
(“Mott”). When she returned to Manchester, she reunited with her home
church, New Hope Missionary Baptist Church, under the leadership of Pastor
J.D. Walker, where she attended regularly until her health failed.

Sister Louise was a faithful and loving daughter, and she helped take care of
her elderly parents until they passed. She was a devoted and loving wife to
the late Dixie Dickerson, II, and she also took care of him at home until his
passing. She was a caring and doting stepmother, and she helped to raise her
two youngest stepchildren, Curtis and Louise.
Sister Louise and her sisters were affectionally known as “the Gamble Girls,”
and she and her sisters, including the late Lois Terry and Mary Ward, were as
“thick as thieves.” They had fun together and enjoyed aggravating each
other. She and her older sister Mary could always be counted on to provide
hilarious exchanges that ended with them threatening to “beat up” the other.
She also rabble roused with “Mott” and her baby sister, Lenora. However,
none of them could get the best of her as she always had something for
them. She gave as good as she got, and her late, little brother, Melvin, would
laugh his head off at their antics.

She also loved music, and she and her sisters used to sing when they were
younger. She also had an old piano that she liked to “bang on.” She was
gifted musically, and even when she was in the Warm Springs Nursing
Home, she could be found singing good old gospel songs like “Try Jesus,”
and “Can’t Nobody Do Me Like Jesus.” Most of all she loved Jesus. Even
when Alzheimer’s and dementia began to erode her mind and body, she
often called out to Jesus to help her and she thanked Jesus for her life. The
diseases couldn’t take away her faith and spirit. She remained a steadfast
soldier in the “army of the Lord.”

She was preceded in death by her parents, her husband, several brothers
and sisters (Clarence, S.M., Lois, Melvin & Mary), two stepdaughters
(Dorothy Leslie and Mary Hunter), a niece (Pamela Frazier), a nephew
(Donnie Gamble), and a great-niece (Angela Gamble).

Condolences, from the Henry-Walker family. Trust in his love .
- Dorothy Walker

MAY LORD COMFORT THE DICKERSON FAMILY SADDENED HEARTS AT THIS TIME OF SORROW..
- BELINDA HALL