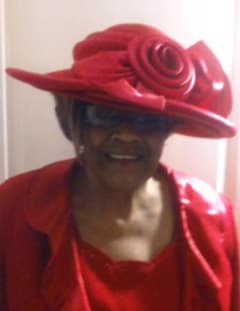 The funeral service will be November 13th, at 1:00 PM at New Hope Baptist Church Manchester GA 31816

Sister Martha “Mott Sue” Frazier was one of 12 children born to the late Bertha Copeland Gamble and William Gamble on May 30, 1935 in Manchester, Georgia. She joined her parents, husband, oldest child, siblings, nephews and a niece in the afterlife on November 7, 2021 after suffering complications stemming from multiple strokes.

Mott Sue was a “firecracker” from day one as told by family members. She survived whooping cough as a young child which made her parents believe she was “special,” so they often catered to her whims, spoiling her unapologetically. Unfortunately, battling whooping cough caused her to start school later than the other children her age, and when she did start, she was retained a year because she was behind the other children. Fortunately, these early setbacks gave her the inspiration and perseverance to later overcome many obstacles in her life.

Martha’s determination to succeed was unparalleled and succeed she did. She made up her late start with school by excelling in the classroom and with extracurricular activities. Not only was she a good student, while growing up, her talent for singing and recitations was renowned throughout the community. She was often featured on church and school programs. She also went on to become the first of her sisters and brothers to graduate from high school…a feat she was very proud of achieving given her shaky early start in life. She was a proud graduate of Meriwether County Training School Class of 1955.

After graduating from high school, she worked a little, but she had greater ambitions. So, she left Manchester to live with her late, older sister, Mary, in Fort Riley, Kansas. It was here that she met her husband, the late Clifford Frazier. He was an “Army Man” and she became an “Army Wife.” As she would often tell people, her sojourn as an “Army Wife” was the best years of her life. A small-town girl from Manchester, Georgia had the opportunity to live overseas in Germany and travel throughout Europe. She saw sights and people and experienced things that she never dreamed possible. Even in her 80’s, she bragged about her life “in the Army” as she often recalled her experiences. The “Army Life” was one of her main claims to fame.

Martha and Clifford had three children, Pamela (Pam), Rickie (Ricky) and Bernita (Sissie). However, their oldest child, Pam, passed away in 1986. Despite the pain and loss of her oldest child, Mott Sue persevered and raised her remaining two children by herself. She instilled in them a quality work ethic and passed on her “can do” attitude. Her son, Ricky, can put together or fix almost anything and her daughter, Sissie, manifested her own dreams for a higher education.

Mott Sue’s big personality and sense of humor were a joy to all those she met. She was a fixture in the family as she always attended, when her health allowed, family events where she was usually honored as a matriarch. She loved being the “life of the party,” and she always had stories to tell. Her nieces and nephews especially loved to party with her as “Aunt Mott” was always down for them having a “good time.” She liked her wine and enjoyed dancing to the delight of her nieces and nephews. She was also an original “fashionista,” and she enjoyed keeping up with the latest fashion trends.

She also often bragged about “being in the know”…meaning she knew what “the young people were up to” because she regularly watched reality, talk and celebrity gossip TV shows like “Cheaters,” “The Real,” “The Wendy Williams Show,” “TMZ” and “Dish Nation.” She also kept an active lifestyle, and when she moved to Riverdale to live with her daughter, she joined the Frank Bailey Senior Center, made new friends and enjoyed many adventures with her senior buddies. She was known for her “smart mouth,” “quick wit,” sense of humor and willingness to try new things like Tai Chi and line dancing.

Sister Frazier was a caring and loving daughter who took care of both her parents in their old age, not putting them in nursing homes, but keeping them in their own home. She adjusted her life, with the support of her family, to make sure her parents lived their remaining days in dignity. She also helped her siblings, nieces, nephews, cousins and friends when she was needed. Her home was a refuge of hope, shelter, good food and cheer for many.

Mott Sue loved going to church and was known as the proverbial “church lady” with her big Sunday hats and matching suits, purses and shoes. She was a member of New Hope Missionary Baptist Church in Manchester for more than 70 years and attended regularly. She also sang in the Adult Choir until her health failed.

Sister Frazier was also known for her good cooking and always having an open door and hot plate for family and friends. Most notably, she made a mean peach cobbler, “slack yo’ mama” chitterlings, pot-licking turnip greens and lip-smacking hot water cornbread. She was such a good cook that she often cooked and sold food as a side hustle in her younger days with her best customers being her fellow co-workers from “the Mill” and Goody’s. Her chitterlings were so good that she had a few customers who regularly paid her to cook them.

Last, but not least, she loved her “Lil’ Dog,” Isis, and enjoyed having conversations with her that were only understood by the two of them. They were the best of friends and the worst of enemies, “frienemies.” They established quite the reputation as “The Ol’ Lady and Lil’ Dog” based on their day-to day antics and shenanigans.

Overall, Mott Sue was a dynamic, trend setting, God-fearing and phenomenal woman who made the best out of what life had to offer. She will be remembered for her warm heart, feisty personality, sense of humor and good cooking. She leaves to cherish memories of her to her children (Ricky and Sissie), sister, (Lenora Carroll), nieces, nephews, cousins, friends, adopted son, Michael Maglorie, granddaughter (Mmenyene Usanga), the Jones Family, and her Lil’ Dog, Isis.