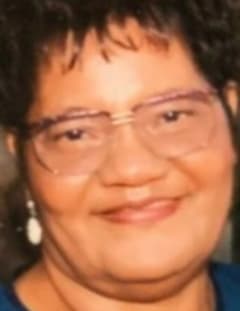 Live video stream for the service will be available on Facebook.
https://www.facebook.com/Sewell-MortuaryKK-Sewell-Funeral-131923462422/
(clickable link below)

Visitation will be from 6 to 8 PM Monday the 22nd at the funeral home.

Funeral Program can be viewed from the link below.

Minnie Rebecca Carter Jackson was born on November 19, 1937 in Talbot County to the late Willie and Hattie (Walton) Carter. She was one of 9 children.

Minnie, her sisters and brothers lived near the Talbot County’s Peach Packing House on Packing House Road. It was known for peaches and a railroad track near their family home.

Minnie was married to Copeland Jackson on April 7th, 1958 in Talbot County. Their union of 60 plus years brought forth five children; 4 girls and 1 son. Minnie and Cope encouraged them to embrace a path that would include love, faith and most importantly family. Minnie set the example to stay prayerful, think positively, and be the best that you could be. She believed if you can dream it; you can be it.

Minnie was masterful at almost anything she set her mind to. She could cook like the most famous chefs. Her biscuits and sweet potato cobbler are legendary. She could sew clothes like the best in the New York City garment district. Most of her children’s clothes were sewn by her. The ball gowns, suits, and outfits were most memorable. She enjoyed taking nature walks and gardening. She aspired to be a beautician and loved styling hair and making everyone look beautiful. Most of all she was skilled at bringing people together. She welcomed everyone into the warmth of her family home, no one left without feeling her touch and she never turned anyone away.

Minnie set her sights on working with kids in the school system. She nurtured neighborhood kids, the church youth, cheerleaders, sports and band parents, and the school kids. She has supported and mentored many generations of kids in the county schools.

She retired from Talbot County Schools on May 24, 2000. She departed this life on March 19, 2021 at the age of 83. She is preceded in death by her husband, Copeland Jackson, Sr. She leaves to mourn 5 children - Marilyn Jackson (Shiloh, GA); Beverly Kent (Atlanta, GA); Pamela (Keith) Valles -Miami, FL; Cornelia (Reginald) Coles – Pittsburgh, PA; and Copeland Jackson Jr . (Nimon) – Senoia, GA. 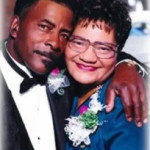 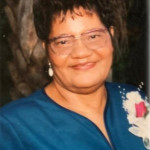 My heart and prayers go out to you Cornelia, Reggie, McKenzie, and Jackson.
- Brenda Dennie

Although, I didn't know my Aunt Minnie that well. I never forgot our phone conversations about her famous sweet potato cobbler after tasting it at the family reunion on August 24 2001. She attempted to give me the recipe but told me that it was hard to share it. I had to be in her presence to experience it and her natural ability to create such love for her cooking. I am greatful for those conversations and visiting her home as a child with my siblings. I am thankful for those memories. My condolences to you all family and May the God of all comfort be with you all. Love your cousin Sharon and her daughter Rachyl ❤
- Sharon Wright

Our sincerest condolences to your family. Our thoughts and prayers are with you. - William and Keva and family
- William Wilson
Sorry for your loss
- Gregory Wilson

Our deepest condolences to the Jackson family. Cornelia and Reggie may you find comfort in knowing that we share your sorrow today but your memories of Mother Jackson be a comfort to you always. We love you ❤️ Sharon & Christian Wilson ST Petersburg, Florida
- Sharon Wilson

My Aunt Minnie will always be remembered as a loving wife, a strong mother, and a wise Auntie. Forever will I savor the memories of her and her role in creating the strong women and men of her family. Rest in peace.
- kenneth Hall