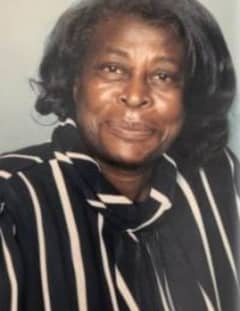 Visitation is Friday the 22nd from 4 to 6 pm at Sewell Mortuary.

On March 27, 1927, in Senoia, Georgia, William and Mary StricklandBailey welcomed a beautiful baby girl into the world. The name chosen
for such a glorious girl was Ozie Lee Bailey. Ozie was the third of nine
children. She was educated in the Coweta County School System. On
November 15, 2019, Ozie heard the voice of Jesus say “Come unto me, all
ye who are weary and heavy laden, and I will give you rest,” at which
time, she gave up her struggle against Alzheimer’s disease after fighting
this battle for more than 20 years.
Ozie grew up in Coweta County, Georgia. Early in life she helped her
family harvest cotton and performed other duties to maintain their
farm. Ozie joined the Mount Calvary Baptist Church at an early age and
was very active in various auxiliaries.
In the 1940’s Ozie met and married Marvin Dunlap. Marvin served in
the United States Navy for several years. She was blessed with six
children, Willie Lewis (who died before the age of two), Thomas, Annie,
Dorothy, Earnestine, Lee Andrew. On December 23, 1953, her husband
Marvin died of a tragic death. This was a sad time for Ozie and the
family. She took on many different lines of work to support herself and
children. In the 1960’s Ozie was able to purchase her first home. She
worked at the Pepper Plant in Griffin, Goode Brothers Poultry in College
Park and later domestic and caregiver services. Her hobbies included
canning, baking, fishing and maintaining her flower gardens.
Ozie was preceded in death by her parents, William and Mary Bailey;
five brothers, John, William C., Dewey, Alfred, and Jimmy; son, Willie
Lewis; and daughter, Earnestine Sloan.

I was so sorry to hear about Sister's passing. My sincerest condolences to the family and all of you are in my prayers.
- Virgeleen
Prayers for our Quarterback #8 and his entire family. We love yall and we always got yall!!! Your 10u Old National Knights Family
- Allison Noel
I love you Grandma more than you’ll ever know. - Kristy, KMan, Kiyra
- Kristy Godfrey