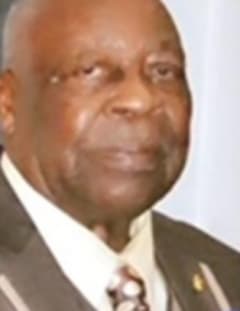 With humble respect, Sewell Mortuary in Grantville announces the transition of Roosevelt Parks on February 28th, 2021.

The funeral Service will be held on March 6th, 1:00 PM at Sword of the Lord on East Washington Street in Newnan. A limit of 50 people in attendance, please.

Roosevelt Parks was born on September 4, 1929 in Troop County to
the late Whitaker Parks and Mattie Stepp Parks. He was called home
on February 28, 2021.
He was preceded in death by three sisters and one brother; and one
son Larry James Parks.
He was an avid fisherman and hunter. He attended the Sword of the
Lord under the late Bro. Randy Hall for over 10 years where he served
as deacon and he was a proud, faithful member of the men male
chorus.
He leaves to cherish his memories his wife of 45 years Ollie Pearl
Parks of Grantville, GA; his six sons, Roosevelt Jerry Parks Jr. of
Atlanta, GA, Arnold (Velma) Thomas of Atlanta, GA, Ferrell (Vell) Parks
of Atlanta, GA, Calvin (Buster) Parks of Atlanta, GA, Cory (Big Man)
and Latasha Parks of Grantville, GA, and Casey Parks of Newnan, GA;
his five daughters, Cynthia Elaine Parks of Atlanta, GA, Louise Nash of
Atlanta, GA, Angela Parks of Jonesboro, GA, Melissa (Lisa) and Kelvin
Parker of Union City, GA and Tammy (Tam) Parks of Newnan, GA; one
brother Melvin (Bernice) Parks of Atlanta, GA; one sister Helen Davis
of Atlanta, GA; one brother-in-law Robert Ponder of Atlanta, GA; four
sisters-in-law and four brothers-in-laws; and a host of grandchildren,
great grandchildren, nieces, nephews, cousins and friends.

Sending Our Deepest Sympathy To The Parks Family. You Are In Our Prayers Sis. Elaine And Lenvor Childs & Family
- Elaine Childs

My deepest condolences to your family and friends
- Lois Walthall

Mr Roosevelt will be missed. And he believed in helping family and friends of the family. /His grandson is my nephew. /And I will never forget one day my car gave me trouble and when I called him for help he caMe to lagrange and helped me. May God bless Mrs Ollie and the rest Of the parks family and I pray for your peace during this hard time. With love from. Pronethies. (Tootie) Mayes
- The Mayes Family

Condolences to the Parks family from Mr and Mrs Robert and Mattie mayes and family with love. And May god's angels keep you all in their spiritual arms during this difficult time.
- The Mayes Family
Daddy we love u very much and u will be missed!Love Tam
- Tammy Hood